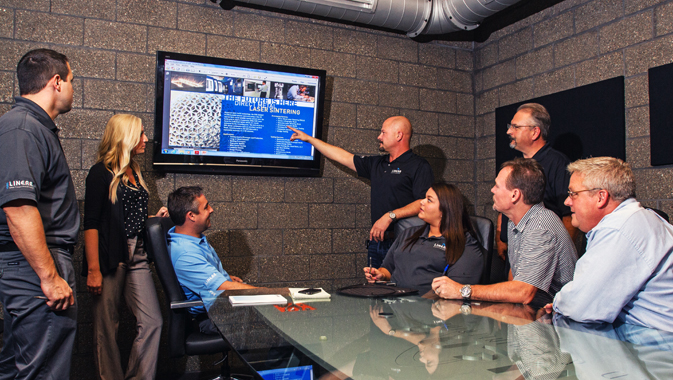 Linear Mold & Engineering is North America’s largest provider of 3D metal printing services and has been nominated as one of the top fifty fastest growing companies in Michigan. The company provides tooling for compression and injection molds as well as tooling for processing thermoplastic resins. We spoke with Marketing Coordinator Kristen Eisiminger and Marketing Director Paul Parzuchowski to learn more.
~
John Tenbusch, CEO and president of Linear Mold & Engineering, and Steve Jobs, the late CEO of Apple Inc. had something in common; both were let go from previous jobs and became a thorn in the side of their former employers through the success that followed.

John Tenbusch started out as a wood modeler who then got into sales. He was successful but reached a plateau on his sales commissions and was let go. In 2003, John started his mold business with two people and one building making traditional molds and tools for the automotive and agricultural sectors. The company has grown to potentially become one of the top fifty fastest growing companies in Michigan.

In 2005, he bought his first DMLS (Direct Metal Laser Sintering) machine – a 3D metal printer – in order to make conformal cooled tooling inserts. That led into creating both metal prototype and production parts for an array of industries. “John himself is an engaging, motivating, risk-taking entrepreneur, followed by a team of passionate individuals, and, collectively, we make a juggernaut!”

3D metal printing, also known as additive manufacturing, is revolutionizing manufacturing. “It is changing the landscape of manufacturing much like CNC (Computer Numerical Controls) technology did in the early eighties.”

Linear now has the largest number of 3D metal machines of any privately held firm in North America. It separates itselves from the competition through its early adoption of new technologies.

Linear is proud of its strong ties to Michigan and Detroit. Most of its employees come from the city that was the leader in the automotive and manufacturing arenas. They remember the heydays of the sixties and how things took a turn for the worse in the seventies and eighties. It was called the Rust Belt, but Paul likes to refer to the city now as the “Must Belt.” Linear is helping to rejuvenate manufacturing in Detroit by establishing it as a hub for additive manufacturing. One way of accomplishing this is its involvement with a half-dozen universities in the area.

“We want to build a consortium where we can exchange our curriculum – because we create our own training here to teach other organizations how to take advantage of 3D metal printing – and, in exchange, we can provide them with curriculum and access to machines. In turn, they will give us students, internships and – possibly – complete some research for us.”

The biggest challenges in the industry are keeping up with demand and making sure there is enough machinery to meet that demand, and resources. Over the next couple years, Linear plans to have the resources to fill that demand. Presently, it has one of the largest groups of additive manufacturing professionals in North America if not globally.

The idea going forward is to work with universities and colleges to create students who see additive manufacturing as a viable career option and who will then be excited to learn more about what it takes to be an engineer, a technician or a skilled labourer in the field. “We want them to stick around in Detroit and take pride in what we are doing which, in turn, will help grow this industry.”

Back in November, Linear hosted a tour for many local science and technology teachers to better understand the work of the company so that they could then educate their students. A high school robotics team from Livonia also visited recently. Paul is an adjunct faculty member at a couple of universities, and he brings his personal experiences, knowledge and know-how of 3D metal printing and marketing to create interest.

“A slogan that Michigan Governor Snyder spearheads is called ‘Reinventing Michigan’. One of his initiatives is to help make manufacturing cool again by engaging students from K-12 as well as college. He has challenged organizations, like Linear, to engage students through internships, hands-on labs, tours and field trips.” Linear has two, if not more, tours per week for commercial, public and academic visitors.

Linear has positioned itself as North America’s largest privately held provider of 3D metal printing services and has plans to expand its current headquarters by 19,000 square feet, making room for up to twenty more machines over the next eighteen to twenty-four months.

Linear ’s philosophy is that the more the consumer understands the potentials and limitations of 3D metal printing, the greater the demand will be for that service. “We project that by 2020, additive manufacturing will be a $20 billion industry – with that including plastic as well. We feel, conservatively, that metal will represent ten percent of that, so that’s a $2 billion industry where we are already the largest provider of that privately.”

The company’s Center of Excellence is a five-step plan: coach, consign, train, support and consult. “We can coach you on a selection, consign you a machine, train you on the use, support you through production and consult on expanded use. Once we put a machine into your building and you complete training, one of our technicians will support you on a contractual basis for as long as necessary. You cannot just plug in an additive manufacturing device and treat it like a microwave or a printer. It just isn’t that simple.”

There are three crucial aspects to consider. The first is the designing and engineering side; the second is the actual machine operation; the last is the need for skilled labour post finishing. As the customer begins to take advantage of this machinery and wants to expand, it can tap into Linear’s network of executives who will share more data, on a consultant basis, on how to expand the business further.

COE geographically assumes that the machine will be in a customer’s building. Some businesses cannot have the machine in its building for various reasons, from space to expertise or the need for a clean environment. For this application, Linear creates what it calls “R&D Pods”. The Pods have the machines physically located at Linear in Livonia. Data is sent by the customer, and the operation can be done with the build and post finish before the finished product is sent out.

“It acts as a kind of storage garage or, in the IT world, it can be seen as a server. Why keep all the data on-site when you can send it off-site and let somebody else maintain the servers? In a Pod concept, we would maintain the 3D metal printing machines and help you to maximize the use and bill you monthly, rather than trying to have you figure out how to locate it.”

Linear also provides training on the whole process. “At first, management and the competition were wondering as to why we would share our secret sauce! The idea is that we see ourselves as innovators – the Google or Apple of additive manufacturing. As innovators, we are not afraid to share, and we are always looking for new ideas, rather than trying to hide ideas.”

By sharing its ideas, Linear positions itself as innovators in the field, a business plan it hopes will lead to further growth as more people understand the technology and take advantage of it. “So, if they get into the business, we in turn will be creating more business for ourselves.” 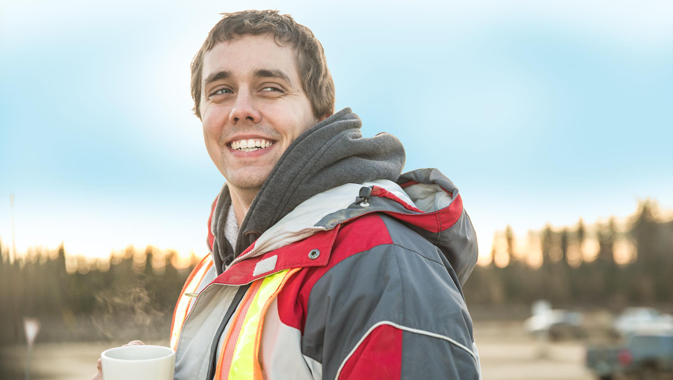