The Business of Geothermal Heating and Cooling

Thermal energy is stored in rock and fluid found beneath the Earth’s surface and can be tapped to generate electricity, as well as utilized for its heating and cooling capabilities. Outdoor temperatures change more than the temperatures underground, as the direct result of the Earth’s insulating properties; about four to six feet underground, temperatures actually remain relatively constant. And smart operators can use this to their advantage.
~
Geothermal energy has been used for thousands of years, in many countries, for the purposes of cooking and heating. Commercial geothermal heating and cooling systems have been present in Canada and the United States for over sixty years and continue to grow in popularity as the technology becomes more efficient and as fuel prices continue to fluctuate, having a significant impact on home heating bills.

In the late 1940s, Frank Hooper, professor emeritus of mechanical engineering at the University of Toronto, working with what was then Ontario Hydro, equipped the first house in Canada with a geothermal heating and cooling system. The house, located in Port Credit, Ontario, was equipped with a geo-exchange system which uses less energy than the traditional method of burning fuel to generate heat.

The technology was not readily accepted as it lacked economic sense to install a geothermal system when electricity and fuel costs were low at the time. Over the last ten years as fuel costs have continued to rise, the popularity of geothermal heating and cooling systems has grown, as these systems can prove to be 50 percent more efficient than natural gas furnaces and 75 percent more efficient than oil furnaces.

Geothermal exchange systems, also known as geothermal heat pumps, are used to take advantage of the subterranean temperatures of the Earth, which retains solar heat. As the technology continues to develop, so too do the companies which specialize in installing and servicing geothermal systems and the people who employ them as an alternative method of heating and cooling their homes and buildings.

How do Geothermal Systems Work?
Geothermal systems are capable of simultaneously heating and cooling a home, heating a pool, and supplying hot water to the home, as the energy contained in the ground beneath the average building is 300 times more than what is required to heat the average building. Geothermal systems can heat in the winter and provide a “heat sink” in the summer, regulating temperatures in the home, saving energy and money in the process.

There are three main components to geothermal systems: a heat pump unit; a buried system of horizontal or vertical pipes which forms an open or closed loop for the liquid heat exchange medium; and an air delivery system (ductwork, radiators, etc). Geothermal systems can be incorporated into new builds or retrofitted by being connected to a home or building’s existing heating and cooling distribution system.

If an aquifer is available, engineers will develop an open loop, rather than closed loop system. Underground water is pumped into the indoor handling unit where the liquid is run past a heat exchanger and then returned to the aquifer through a reinjection well. In the summer, geothermal systems pull heat from the home or building and carry it through the loop system / reinjection well where the heat is stored in the cooler earth or aquifer below.

Heat pumps are the most vital part of the geoexchange system, transferring thermal energy from the source (which is the ground in the winter months) to the heat sink, operating in reverse in the summer months. In the winter, the Earth acts as a boiler and that heat is absorbed into the loop system and carried indoors and distributed by the heat pump.

For heating, geothermal pumps use electrically powered compressors to increase the temperature of the fluid circulating in the loop system to a temperature that is useful for heating. Geothermal heat pumps operate at a range of efficiencies throughout the year, losing efficiency in the winter months. They have a Coefficient of Performance (COP) of 3.0 – 5.0 which means they supply three to five units of heat for every unit of energy used to power the system.

Pros and Cons
When building a new home or commercial space, or when looking to replace an existing HVAC system, installing or retrofitting a geothermal HVAC system is a viable option that makes both environmental and economic sense. Though the initial costs may seem daunting, there are many benefits to making such an investment in your home or commercial building.

In Canada, the province of Ontario represents two-thirds of the market for geothermal systems, with an estimated 35 000 installed nationwide. A great deal of the success of these systems was attributable to the provincial and federal rebates provided to home and building owners who chose the geothermal option for heating and cooling. Those subsidies have since been withdrawn though changes to Ontario’s building codes and efficiency standards have proven to be an incentive to go geothermal.

There has been more commercial success than residential in terms of numbers of units being installed, with some building developers making the decision to install geothermal systems in their buildings and supplying the energy to building owners and tenants, usually in accordance with long, fixed term contracts. In Ontario, between 2008 and 2010, of the geothermal systems that were installed, the majority replaced oil fueled and electrical heat systems, as opposed to natural gas fueled systems.

Besides being more efficient and cost effective, geothermal systems are quiet, require minimal maintenance, and are environmentally friendly. Although the electricity used to operate the geothermal systems is not renewable, the thermal energy being moved from the source to the sink is renewable. As a result of the system operating indoors and underground, away from inclement weather, the system has a longer lifespan than traditional HVAC systems.

The Bottom Line
Many variables exist when it comes to pricing out geothermal systems for your home or commercial building. Although the initial cost of installing or retrofitting geothermal heating and cooling systems may seem substantial, especially when compared to conventional systems, over the years it will easily pay for itself with a reduction of your annual operating costs to a fraction of your previous monthly bills.

The cost of installing geothermal systems is relative for new installations and retrofits. For an average sized home, costs are estimated at $15 000 to install, compared to $9 000 to $10 000 to install a natural gas furnace, for example. The additional upfront costs could be recovered in a year or two as a result of lower fuel costs, also taking into consideration the increase in electricity used to power the geothermal system.

Estimates for geothermal systems take into consideration the size of the building as well as the existing HVAC, ductwork, radiators, and insulation used, the size of the heat pump required to heat and cool the space, the climate in which the system is being installed, the size of the loop system required, ground conditions, and the availability of certified contractors to complete the installation.

The overall cost of the system will be comprised of the geothermal heat pump, installation, any potential ductwork / radiator modification, drilling for the loop system, and materials. Some people choose to employ a backup heat source to supplement the geothermal system in their home or building on the coldest days, thus requiring smaller heat pumps and associated loop systems. This will help to lower the upfront costs by reducing the size of the equipment.

Some companies, aware of the financial burdens associated with an installation of this capacity, have been working with financial institutions to set up a leasing program, creating additional funding options for interested customers and making the technology more accessible and the benefits more readily available. These companies have enjoyed significant growth over the last decade or so, and are poised to continue to capitalize on the many opportunities that remain in the market.

As the popularity and reputation of geothermal systems increase, so too will the benefits associated with this technology. There is a lack of trained, skilled workers specific to the installation of geothermal systems and some companies are creating internal training programs to ensure they can satisfy the demand for geothermal heating and cooling system installations. Some companies, such as NextEnergy in Ontario, are working with educational institutions to address this industry shortcoming. 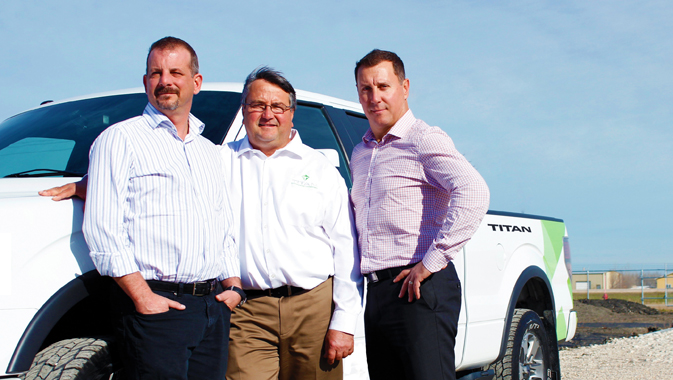 State of the Art Containment Solutions