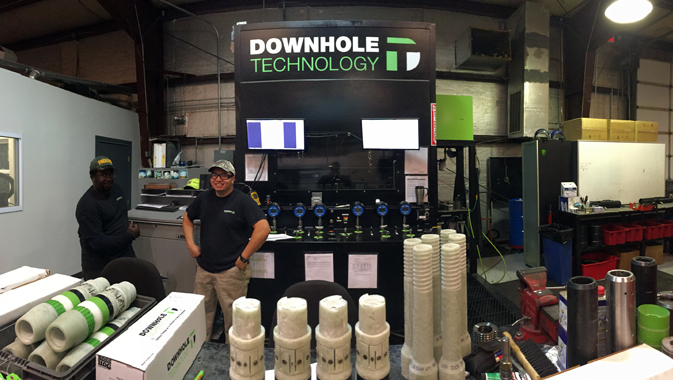 Since June 2011, Downhole Technology has been a bulk manufacturer and provider of composite frac plugs to oilfield service companies throughout the United States. Founder and Director of Technology Duke VanLue designed the company’s Boss Hog Frac Plug to be a more efficient, reliable and cost-effective plug to minimize environmental risks while saving time, water and other resources. Full vertical integration at the company’s Houston, Texas state of the art manufacturing and testing facilities ensures product quality and traceability of materials.

~
When it comes to mechanical knowhow, some people spend years studying in school, whereas others simply have an innate knack for knowing how things work. From a very early age, Duke VanLue was one of those kids who instinctively knew how to take things apart and put them back together. After completing high school, the young VanLue sat about working in the field of designing and testing composite plugs for use in the demanding field of oil and gas. In time, he created his own design and consulting business and went to work as an independent for a company, designing and testing frac plugs.

Soon, he realized that the company was unable to find not only people to make the material, but machine materials in the volumes of the company required, so he set about making and machining the material for it, which it would then assemble and sell. Seeing the need for a state of the art business designing, manufacturing and selling innovative frac plugs, VanLue – working with a private equity firm – formed Downhole Technology in 2012 and hasn’t looked back since.

Downhole Technology specializes in the design and manufacture of the next generation of frac plugs. Manufactured entirely in the United States of America using American-sourced materials and components, the company’s unique plugs are not only smaller, lighter – being made from less material than others – but directly result in significant cost savings for the nation’s oil and gas companies in terms of water usage, manpower and time.

Fracking, also known as hydraulic fracturing, is a widely-used process involving water, sand and chemicals to enable drillers to extract oil and natural gas from shales previously unable to be tapped. As one of the most effective and important technologies of the twenty-first century, fracking is also an expensive process, one where saving even a few minutes translates into thousands of dollars.

From his many years of experience in the industry, VanLue saw an opportunity for positive change with frac plugs. For many years, all manufacturers did was copy the big companies. Recognizing that it was possible to make plugs that were considerably smaller than existing types, VanLue started the company from scratch.

“This way, we had a clean slate to do whatever we wanted to do and do it right,” says VanLue of the company, whose goal was to create a product which was unique and highly effective then commercially produce it safely and cost-effectively while retaining quality from one manufacturing run to the next.

One of the issues Downhole Technology addressed early on was manufacturing. While major companies design plugs, they often go to a third party to do the manufacturing for them. Problems can arise as there is no communication between the people who designed the plug and those who designed the material. This is an important consideration since the material is a composite and can be made to have different strengths. Knowing that, Downhole took out the middleman, which allows it to manufacture its own material in-house. “So we bridged the gap between the two.” Downhole Technology hired the best people in the industry it could find to work together and develop the product.

Cost-Effective and Better for the Environment
The company’s creation is the Boss Hog Frac Plug, endearingly named after the fictional character Boss Hogg from the popular TV series The Dukes of Hazzard. The name was chosen because it was unique to the industry and one oil and gas field companies could relate to.

“With a name like Boss Hog, you just can’t forget that, and I’m a huge fan of The Dukes of Hazzard,” says VanLue, laughing. “Boss Hog is kind of a unique name to get us in there.” In many ways, the name is a nod to gas and oil field workers, many of them younger men who are fans of the show.

Not only bearing an unusual name, the frac plugs are a much different product that their traditional counterparts and designed to meet high standards for safety and efficiency. Plugs from the competition are typically thirty inches long, whereas Downhole Technology’s plugs are less than half that length – just fourteen inches – and considerably lighter than average plugs. His competitor’s plugs are designed to be rammed down on a ‘tractor’ as opposed to fluid.

Many of the old-fashioned plugs have issues, often “Pre setting” before they arrive at the correct depth. As a result, millions of dollars of assets – including pump trucks and equipment – are sitting idle waiting for a plug to be drilled-out, moved out of the way and the well re-rigged. All of which is time-consuming and expensive. “If this happens, you’re talking about a quarter of a million dollars and upwards from there,” says VanLue.

Unlike the competition, Frac plugs made by Downhole Technology are crafted to extremely high standards. The composite material is produced in the state of the art, climate-controlled facility and machined in-house by highly experienced machinists. All plugs are assembled in-house and tested on-site, subjected to rigorous pressure and temperature conditions – the kind they would face in the field. Due to the plug’s design, it uses 40 percent less fluid during pump-down. Since all work is done at the company’s facilities, quality and materials traceability is assured from start to finish. To date the company has shipped more than 28,000 plugs.

Standing Apart from the Competition
Downhole Technology’s frac plugs start as fibreglass filament wound around a metal rod core. Once the fibreglass is wound, it goes through a resin bath and the result is cut into individual plug pieces. At the company’s in-house lab, plugs are then measured and tested for glass-to-resin properties, temperature grade and properties, temperature, material strength and elasticity. “Once they are approved and check out to our specs, then they can machine them into the components where they are assembled and shipped out,” comments VanLue.

The entire manufacturing process is computer-monitored. Ratios and temperature are tested to ensure the correct balance while resin and hardener are blended using electronic mixers. Once winding starts, humidity, temperature, barometric pressure and other considerations are constantly checked. During curing, billets are traced, cut and inspected to ensure properties are consistent and the manufacturing process is correct. This is followed by form, fit and function tests and visual inspections and verifications. Plugs then go on to quality control, where a team inspects every single part for critical dimensions, then it is on to assembly, where every single part is documented and serialized.

“We do pressure tests at temperatures simulating downhole conditions, and our qualification has to go to twenty per cent above what we advertise the plug for,” says VanLue. “So if we sell a 10K plug, is actually tested to 12K, or above (pressure rating that it will hold).”

Facing enormous pressures of hundreds of thousands of pounds of force on a frac plug, failure is not an option when it comes to maintaining its structural integrity. “It is very critical that it holds pressure, because each stage when they frac can be anywhere from $150,000 to $350,000 worth of ‘proppant’ and horsepower, and you’re controlling that with a plastic plug,” says VanLue.

In just a few years, Downhole has earned an unparalleled reputation for repeatability and quality assurance. Every one of the company’s products is tested from beginning to end to ensure it meets Downhole’s uncompromising quality standards. This includes all raw materials, such as resin, hardener and glass.

Investing in Itself
Over the past two years, Downhole has invested heavily in the staff and equipment to ensure the quality and consistency of its products. “Today we have eight degreed engineers on staff, four of whom have their Master’s in mechanical engineering, and two in composite engineering. In addition, we have five engineering professors on contract with specializations in mechanical design, heat transfer, composite materials, fluid dynamics, and materials engineering, two from The University of Texas at Austin, and three from the University of Houston. Working with The University of Texas at Austin, we have developed a flow loop to study the performance of our plug under flowing conditions. The data from the flow loop in Austin is allowing the engineering professors at UT and UH to develop flow models that predict performance with variations in fluid viscosity, temperature, pressure, velocity, vibration and line tension,” shares VanLue.

In addition, the company has invested significantly in the optimization of its cast iron material to ensure it has the strength to hold pressure but will still drill out quickly and in very small pieces. Says VanLue, “Our chief engineer and engineering manager sits on an ASTM committee for cast iron. The mechanical properties of every billet of composite raw material are checked prior to machining, and every fiftieth production plug is destructively tested to failure to ensure consistent quality is being maintained, and every plug can be traced back to the raw materials from which it was made.”

Running twenty-four hours a day, Downhole Technology currently manufactures about 5,000 plugs per month which are made from eleven components including proprietary cast blend for the bottom slips, the part that bites into the casing. It sources raw materials from American suppliers, with eighty percent from Texas and the remaining twenty percent coming from California and a mill in the Northeast.

Looking Ahead
The team at Downhole is investigating making plugs smaller, stronger and able to withstand higher temperatures. It is also looking at technologies such as RFID (Radio Frequency Identification) in each plug, which will allow oil and gas companies to know exactly where the plug is at all times.

The company has grown at an impressive rate, from fifteen workers in 2012 to more than 200 fulltime staff members. Employees include workers who filament wind billets to be machined, experts who test raw materials before manufacturing, curing specialists and engineers in composition manufacturing. Literally doubling in size in the past three months, the company hopes to double again by July of next year and aims to produce about 10,000 units per month.

Downhole Technology is currently on its seventh facility and recently acquired a 10,000 square-foot building in addition to its present 45,000 square foot facility on seven acres. VanLue emphasizes that, “We continue to invest in the science and engineering underpinning our products. We welcome tours of our facility to reinforce the confidence our customers have in our commitment to quality and consistency. Our employees manufacture the highest quality and best performing frac plug in the industry, and we have the science and engineering data to back up that claim,” he says.

“It took three years to get us to this point, but it was well worth it,” says VanLue of his company. “We really focus on the technical aspect in the realm of things, because it is not just one company out there that focuses on composite plugs. It is such a huge market that we chose to do just one product and do it right.” 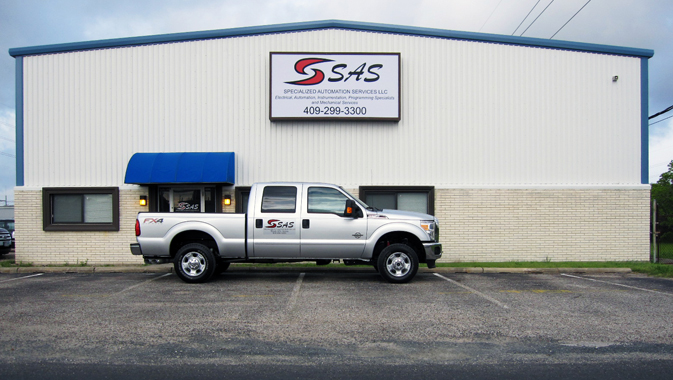