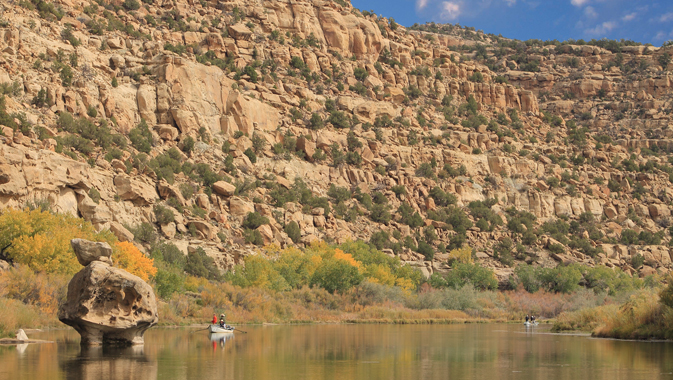 San Juan County’s name is derived from the San Juan River with its upper tributary originating from the nearby San Juan Mountains. Located in the northwest corner of New Mexico, it is the one of the largest counties in the US and is nearly sixty percent owned by the Navajo Nation.
~
“I think that within the next five to seven years, this is going to be a much different place than it ever was before,” says Ray Hagerman, Four Corners Economic Development’s first chief executive officer. “This is probably one of the few places in North America that you could show up in this town with no money in your pocket, and a strong work ethic, and you could still make something of yourself and live the American dream.”

Inspiring words spoken not as a fanciful pipe dream, but with a sincere conviction of the reality unfolding for the county.

The cities of Aztec, Bloomfield and Farmington (the largest) are all situated in San Juan County and form part of the Farmington Metropolitan Statistical Area (MSA). The area is the only region in the US that is a quadripoint for four state borders – New Mexico, Colorado, Arizona and Utah. The Four Corners region lends its name to the development organization.

Four Corners Economic Development (4CED) in Farmington, formerly known as San Juan Economic Development Service, was established in 2012 to serve this region of 130,000 inhabitants. As a relatively new organization, 4CED is engaging in a proactive, comprehensive approach toward realizing a flourishing business environment through a number of new initiatives.

“There’s always an engagement phase to convince people of what you’re doing,” says Ray. “We’re pretty much through that phase. Now, where we are, is really the ramp up phase and putting some of these initiatives into place.”

Eighty-three New Mexico communities, including those in San Juan County, have passed a Local Economic Development Act (LEDA), adopting an ordinance that facilitates local economic development strategic plans specific to their local requirements. LEDA enables the engagement of public-private partnership that will help realize development projects and complements the mission of 4CED.

There are two components to LEDA: municipal and state. The municipal component doesn’t directly affect 4CED’s operations but, “it is sometimes a source of funding for infrastructure projects, [for example], in the local municipalities, in order to help create an environment where economic development can take place,” explains Ray.

The capital outlay portion of the state component of LEDA is sometimes used to allow the state to use funds toward specific projects or companies. New Mexico has an anti-donation clause, meaning that a public entity or the state may not give money directly to a for-profit entity.

“But what they can do is put money toward infrastructure, buildings and land – that sort of thing. That can help a company locate a facility, do an expansion,” Ray continues. “The state component is probably what helps us the most as we’re trying to do specific projects with specific companies.” There are other numerous incentives available in the form of tax credits and deductions to aid in attracting businesses to the region.

Historically, San Juan County has been one of the two major energy producing regions in the state, with Farmington experiencing several oil and gas booms in the recent past. The energy industry remains an economic staple for the area. It is this industry that 4CED is hoping to promote and advance along with manufacturing, health care, education, agriculture, tourism and location neutral business (remote working).

“It’s my big belief that diversification is one thing, but you don’t need for diversification to become dilution,” notes Ray, speaking with regard to the region’s energy sector. “What we try to do is look at not just the actual extraction activity, but look at what industry that surrounds those industries would be beneficial to us locally, no matter where that extraction is taking place.”

Oil and gas production throughout North America and the world has translated into benefits for some of San Juan County’s local manufacturers. “We’re seeing job growth because they’re able to create the equipment that’s used worldwide. What we’re trying to do to diversify away from the actual extraction, is to boost our manufacturing capability. We’re seeing significant expansion in the manufacturing area. We’re also seeing new possibilities for companies.”

San Juan County’s two power plants, Four Corners Power Plant and San Juan Generating Station, use coal for power generation. However, several of the units have been or will shut down in agreement with the Environmental Protection Agency. New equipment will be needed in both plants to comply with reduced emissions requirements.

“Both processes use certain chemicals that have never been needed in the area before,” shares Ray. “The chemicals that they’re going to be using create an opportunity for us to stand up a plant that produces that particular type of chemical. We’ve been in conversations with a couple different companies to try to bring those kinds of plants to pass.” He also reflects that the changing perception of San Juan County as an oil and gas town, “is not a bad identity to redirect… I think we will see a sort of rebranding of our community that is much more diversified than what you’ve seen in the past.”

Praxair Inc., one of the world’s largest industrial gases companies is planning a $67 million expansion in San Juan County, contingent on a state and county partnership and issuance of industrial revenue bonds. Praxair’s plant in Kirtland, approximately nine miles from Farmington, produces liquid nitrogen to support fracking in the San Juan Basin. This proposed expansion will create approximately two hundred jobs. “There’s definitely more companies like Praxair that could be coming in to the area over time,” says Ray.

Situated on the outskirts of Farmington on the Navajo Nation, defense and security company Raytheon celebrated twenty-five years at its Diné facility. The company also recently broke ground for a new 30,000 square foot, $4.4 million warehouse expected to be completed in June, 2015. The new facility will provide jobs on the Navajo Nation while housing completed projects and inbound materials. The Navajo Nation is funding the construction and the State of New Mexico funded the design of the building.

Four Corners has traditionally had a strong agricultural sector. Owned by the Navajo Nation, Navajo Agricultural Products Industries (NAPI) is a corporate entity producing Navajo Pride grains and vegetables. The huge operation, located just outside of Farmington, has over 100,000 acres of environmentally sensitive farming with a global outreach.

4CED is hoping to revamp agriculture as a significant economic base for the region. While there is a need for a large corporate farm like NAPI, there are numerous small-acreage farms, operated by Navajo individuals, which need assistance. This will require innovations and technologies to realize profitable returns for the area’s numerous micro-farmers so that they may secure a position in a very competitive local market. And they’re getting some help from Israel.

“We’re actually working with companies and individuals from Israel that have come over several times to work with the Navajo micro-farmers,” he says. The assistance provided will include ways to make small acreage more productive through the use of high-tech water management, growing the right crops, seed production and engaging in new agricultural methodologies. This will take these farmers from subsistence levels into productive farming where they can realize better incomes and quality of life.

San Juan is the only region in the United States where a tourist can truthfully acknowledge that they’ve stood in four states simultaneously. The Four Corners Monument, owned by the Navajo Nation, was erected in 1912 and marks the junction of the four State borders; always a huge tourist attraction.

There is no shortage of things to do and see when exploring the Four Corners Region and the semi-arid climate is a plus. There are plenty of engaging activities including water sports, fly fishing (some of the best in North America), mountain biking / hiking trails and camping – all within a scenic backdrop.

For the history buff, the Aztec Museum and Pioneer Village, Navajo Reservation, Farmington Museum and the Chaco Culture National Historic Park are within driving distance from Farmington. “It makes a nice marshalling point,” says Ray. “Not only do we have things within an hour or two drive of Farmington, but we’re also within a half day drive to the Grand Canyon… A person can do just about anything they want to do around here.”

The quality of life in San Juan County, “is fantastic,” enthuses Christa Rommé, 4CED’s Marketing Coordinator. “The opportunities to really make a difference here are phenomenal. That’s why I moved here and why I stay. I feel, as an individual, I can make a huge difference here.”

Concludes Ray, “the rest of North America – and the world – will recognize that this is a community that can innovate, that can adapt and can solidify its own future. You can literally create your own legend here. There’s nothing standing in the way of you being successful – except you.”