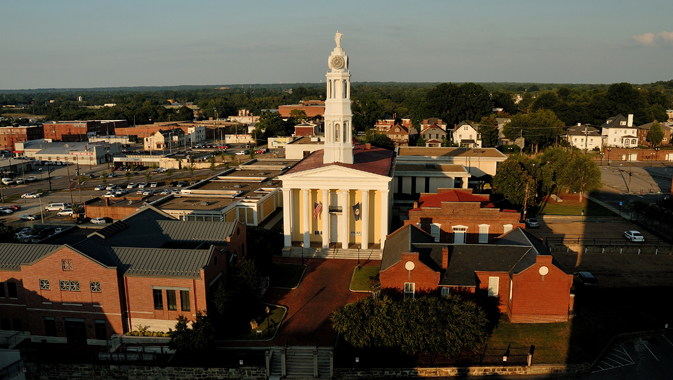 Featured on TV and the silver screen, the streets of Petersburg, Virginia may be more familiar than you realize. Movie buffs will recognize the city’s antebellum architecture in the Oscar winning film Lincoln. AMC’s Revolutionary War-era spy drama, Turn, is also filmed there. “We are becoming a small Hollywood,” says City Manager William E. Johnson III.
~
The new Civil War television series Point of Honor began filming there in the fall, as has Meg Ryan’s directorial debut, Ithaca, which will feature both Meg Ryan and Tom Hanks. In addition, New Millennium Studios – Virginia’s first full-service film studio – is located in Petersburg. Founded by Hollywood veterans Tim and Daphne Maxwell, the 59 acre, $11 million facility is an important economic driver.

Hollywood insiders are drawn to Petersburg’s stunning Revolutionary and Civil War era architecture – as well as the city’s low cost of doing business and pro-business policies. And they are not the only ones; Chinese pharmaceutical giant UniTao has just announced that it will be investing $22.5 million to establish operations in the business friendly city. “This is the first operation that they will have in the United States,” Mr. Johnson reports. Petersburg competed against locations in both California and China to snag the lucrative deal, which will create 376 new jobs.

Arnold Pen Company, Seward Trunk Company, Titmus Optical, Amsted Rail-Brenco bearings are some major employers in the area. Fort Lee is also located nearby. With a daily population averaging 34,000 – a number that includes service members and their families, government civilians, and contractors – the military base plays a significant role in the community. Virginia State University, a historically black college / university (HBCU), although located in Chesterfield County, is also an important part of the community – and has been educating students since 1882.

Local businesses and institutions cite Petersburg’s prime location as one of the city’s greatest assets. The transportation hub sits alongside a network of major roadways including I-95, I-85, I-295, US-1, US-301, and US-460. “You can live in Petersburg and be in downtown Richmond in 20 minutes,” Mr. Johnson points out. “You can be to Richmond Airport in 25 minutes. You can get to Virginia Beach in two hours, you can go to Williamsburg in 45 minutes, you can go to Charlottesville in an hour and a half. And – depending on what time of day you leave – you can be to Washington DC in an hour and a half.”

There are also plenty of public transportation options to whisk residents from here to there. CSX and Norfolk Southern rail systems both have transportation centers in Petersburg and Amtrak offers daily service to and from the city. An extensive bus system provides transportation within the city, as well as to Richmond and the nearby communities of Colonial Heights, Dinwiddie, and Hopewell.

A number of developers are taking advantage of these programs. In one exciting, $6.2 million project, the old Butterworth’s building has just been transformed into a place for “artists to work, live, play,” with 45 apartments, 78 studios, and an event area. The old BB&T bank building is being renovated and will soon house city offices, commercial space, and market rate apartments. In Petersburg’s downtown area, roughly 1,000 new market rate apartments have been constructed over the past decade. And, on the outskirts of town, two new subdivisions have recently been built. Using $752,000 in grant money, downtown Petersburg’s South Side Depot is in the process of being restored and converted into a visitor center for Petersburg National Battlefield. “That will attract an additional 15,000 to 20,000 visitors a year to Old Towne Petersburg,” Mr. Johnson predicts.

The city has also been working on dredging the Appomattox River, which runs alongside town. The project will make the waterway navigable, allowing commercial use of the river as well as recreational options including a harbor, pier, park, and other amenities.

Notably, many of Petersburg’s development incentives are directed toward restoring its historic treasures and beautifying older buildings that have fallen into disrepair. “We have a rehab tax credit incentive program for developers trying to come in and redevelop property,” Mr. Johnson details. “And we had a host of old warehouses that created an opportunity for historic tax credits, new market tax credits… We have a preservation planner who works with us and helps with our architectural review board. We are seeking grant opportunities all the time for city held buildings that are historic and also to help private residents redevelop their property. We have a lot to offer.”

This commitment to preserving Petersburg’s past is crucial; the city is rich in history, and African American history in particular. Petersburg was the site of one of the nation’s oldest and largest free black settlements, Pocahontas Island, and the local African American population has always played a powerful role in the city’s success. In the late 18th century, Petersburg residents established two of the first black churches in America. In the early 19th century, the city’s citizens helped found the African nation of Liberia. A large number of black soldiers fought in and around Petersburg during the Civil War, and the city is famous for its role in the war. Petersburg also went on to play a key role in the Civil Rights Movement.

Petersburg has been busy celebrating the 150th anniversary of the siege of Petersburg, and the city is actively celebrating the important contributions that African Americans made in the war. “We are beginning to tell a different side of the story – the role that Afro-Americans played in the Civil War and in history in general,” Mr. Johnson shares. There have been multiple Sesquicentennial Anniversary events, including reenactments, lectures, tours, and a 1,000-square-foot traveling panel exhibition called An American Turning Point: The Civil War in Virginia. This exhibit focuses on Civil War voices that have been marginalized in the past – namely free and enslaved African Americans, women, and children – and offers insight into how the war affected civilian populations.

While Petersburg boasts a proud past, the city is also focused on the future. Petersburg is actively seeking developers, particularly those that would bring in new hotels, restaurants, retail, and entertainment venues. “The opportunities are outstanding,” Mr. Johnson states. “And we have the land to accommodate all of this [development] here in the city.” Petersburg is also eager to continue its lucrative relationship with Hollywood. In addition, tourism is being promoted, and heritage tourism in particular.

To ensure that its unique assets are fully recognized by potential developers and businesses, as well as by local residents, Petersburg is in the process of launching a marketing and rebranding campaign. “We want to make sure that everyone knows exactly where Petersburg is, and to understand [our history], and continue to have pride in our city,” Mr. Johnson explains. “Petersburg is a great place to live, work and play.”