Growth is a Group Effort 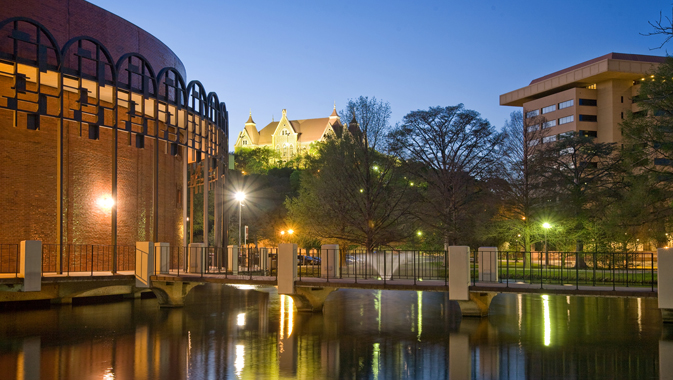 The Greater San Marcos Partnership is a project in community and corporate synergy, which illustrates the power of strategic development through industry collaboration. This public-private partnership centres on job creation and investment in Hays and Caldwell Counties, diversifying the economy of this prime location. Its incentives for new businesses have pushed the Greater San Marcos region to the forefront of the country’s industrial development and innovation.
~
The Greater San Marcos area is a portion of central Texas that is conveniently located between Austin and San Antonio. Home to Texas State University, spring fed rivers and a diverse network of corporate leaders, the area’s unique offerings have made it a hotspot for companies seeking affordable, business-friendly development. Ranked the United States’ “fastest growing city” by the US census bureau in 2013, the City of San Marcos has facilitated the type of diverse industry growth to which most regions can only aspire.

Although the Greater San Marcos Region has received a large amount of attention for its corporate and economic successes, it is not the only aspect of the region which has seen growth. The regions’ affordable cost of living and vibrant community offerings have also influenced residential population growth and an expanding tourism sector. From community to economy, the Greater San Marcos area has embraced growth with open arms, and according to Cruz, the success has only just begun.

An economic development organization with a plan
In 2010, the Greater San Marcos Partnership was formed through a joint effort of the City of San Marcos, Hays County, Texas State University and Central Texas Medical Center. The regional economic development organization formulated a growth-centric strategy, with the aim to benefit not just the city, but the region as a whole. “We felt that economic development was something that should be moved to the forefront – and not just something that would affect one city, but the region as a whole,” says Cruz of the decision which continues to drive record-breaking growth in the area.

Believing in the strength of the local community and industry, the Greater San Marcos Partnership committed to a five year plan.

The Great San Marcos Partnerships’ role within the regional economy is multifaceted, and dynamic. “The role we play in the community is three fold: we market and promote the region around the country and abroad, we work actively to recruit new companies to relocate and expand within our two county footprint and we also work to grow our own.”

Overall, the partnership, which represents both Caldwell and Hays County, is dedicated to the creation of high-quality jobs and increased investment in the area, working to not only attract new business, but enhance existing industries as well.

A business-friendly environment
Achieving the title of the “fastest growing city in America” was no easy feat, but according to Cruz, the business-friendly climate of the Greater San Marcos Area makes it an easy choice for companies in search of an affordable cost of doing business and a diverse talent-pool.

In the past two years, ten major companies have chosen a relocation or expansion within the Greater San Marcos region, an accomplishment Cruz attributes to the area’s enthusiastic attitude toward welcoming new businesses. “Not only are we looking at new companies, but we are also looking at our existing companies. How we can help them to become stronger and to grow? – because all of those factors will influence our regional economy.” Located halfway between San Antonio and Austin, the area is strategically placed between both major metro centres, making it a prime spot for development.

The region’s offerings are further supported by Texas’ robust state economy, which is widely accepted as one of the best business climates in the country. The way economic development takes shape in Texas is different to many other states; in Texas, development is extremely decentralized, granting municipalities a large amount of responsibility in terms of growth. This relationship benefits growing businesses, allowing the municipalities to more strategically plan, and fund beneficial projects with regionally driven business incentives.

Working closely with Texas State University, the Greater San Marcos Partnership sought out to investigate which industries which would most closely complement the existing resources of the region. Building from this in-depth understanding of the area’s existing infrastructure, the partnership continues to attract and accommodate a range of growing industries including cyber technology, aviation, advanced manufacturing and materials, life sciences, clean technology, corporate professional operations and supply chain logistics. This market-driven strategy is just one of the reasons San Marcos has become a hub for companies seeking expansion or relocation.

The importance of a skilled workforce
The Greater San Marcos Partnerships’ vast successes are the result of a unique strategy which focused on not only natural resources, but people power. Texas State University is home to more than 36,700 students, which is enormous when one considers the population of the Great San Marcos is 54,000 (excluding students).

One of the region’s greatest assets is a highly educated and skilled workforce, a feature which has made the area a hot spot for knowledge driven companies. Cruz explains that a talented workforce is a major benefit in terms of attracting the types of professional sectors which drive the regional economy.

“The first thing a company is going to look at when they are making a relocation or expansion decision is the talent and the availability of workforce. We are an attractor of talent and being able to attract a workforce from both Austin and San Antonio is a benefit to any company who relocates here.”

Texas State University, is the fourth largest university in Texas and is home to some of the most innovative and industry-focused programs on the planet. A 2014 study proved that Texas State had a $1.6 billion annual economic impact on the region in addition to generating more than 23,200 jobs. An Emerging Research University (ERU), Texas State has a growing research portfolio which is supported by the new Science, Technology and Advanced Research (STAR) Park. The park is aimed at helping nanotechnology startups develop and commercialize cutting edge technologies. The university continues to create corporate partnerships which allow businesses to research with some of the nation’s most technologically advanced equipment while simultaneously granting researchers valuable corporate insight and experiences. In this way, Texas State is changing the fabric of the area’s industry and economic development.

Beautiful, affordable, safe
The Greater San Marcos area is one of the oldest continually inhabited sites in North America. Today, the region continues to attract professionals and families alike, promising a great quality of life paired with a low cost of living. With all the appeal of San Antonio or Austin, the area offers a high standard of living without the hustle and bustle of big city life. “It’s a very high quality of life, with close proximity to Austin and all the attractions Austin has, but with a very affordable cost of living, which is something very unique to our area,” says Cruz.

The vast growth of the regional economy has contributed to population growth as more and more people call the Greater San Marcos area home. The beautiful setting is complimented by a vibrant and safe community: features which continue to attract young professionals and growing families. “We are very fortunate to have the population growth we have. That happens when you have an attractive and affordable place to live.”

Rich with natural resources, (including a river which remains at a constant 72 degrees Fahrenheit), it is easy to see why early settlers, twenty-first century tourists and business alike choose to venture to the Greater San Marcos Region. “The natural resources and the natural environment has been something which attracted people for thousands of years,” says Cruz. The beauty and laidback atmosphere of the Greater San Marcos is a clear attraction for many.

Ranked among the “top five tourist destinations” in Texas, the Greater San Marcos Region is not only a great place to live and do business, it’s also a great place to visit. Attracting over 14,000,000 tourists annually, the area offers everything from outdoor adventure to world-class shopping.

Growth is a Group Effort